In this post, we will walk through the steps to develop a SOAP service using Java and we will also leverage Spring , Apache Camel & Apache CXF.

Create a maven project using IDE and add following dependencies in the pom.xml

About the components used in pom.xml 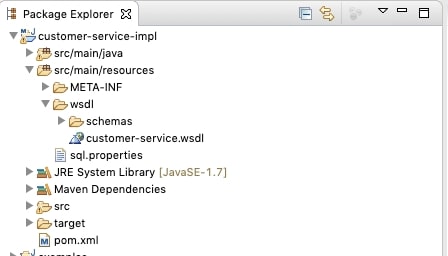 You can refer this post for detail discussion on designing schema

Below is the schema which we will use in this example
src/main/resources/wsdl/customer-service.wsdl

You can refer this post for detail discussion on designing wsdl.

Below is the WSDL which we will use in this example
src/main/resources/wsdl/customer-service.xsd

We’ll use the xml based spring configuration for this example to expose the service.

Now, we’ll define the CXF Endpoint to expose the service

All the camel routes will be written in the camel context, so we will create a camelContext in the same file.

We will define the data format to convert the soap xml payload into java object and vice versa. Context path is the root folder where you have all the auto-generated classes (WSDL & schema objects created using codegen-plugin)

We’ll define the camel route based on the logic, in this example route is pretty small & simple, but trust me at enterprise level it can be bit complex and longer.

This is how your routes file will look like
src/main/resources/META-INF/spring/bundle-context-routes.xml

For this example, we will write a processor which stores the employee data in map and return customer ID.

Once we have the jar file ready with us, we’ll deploy it JBoss Fuse 6.3. You can refer this post to learn more about the deployments on JBoss Fuse.

Run following command for the deployment

Now you can check the service url by visiting below url
http://localhost:8181/cxf

Buy me a coffee

Migrate Spring Boot Service from JDK 1.8 to JDK 11 or higher

How to install JDK 11 on mac using Homebrew

How to remove files from Git commit

How to configure passwordless ssh and scp